Cathy was born in Arab Alabama and raised in a small community in eastern Morgan County at Ryan’s Crossroads. She attended Ryan Junior High and graduated from Albert P. Brewer High School before going to work at Ryan Manufacturing. Cathy worked for several years while she attended night classes at Wallace State Community College in Hanceville, where she received her certification as an EMT-Paramedic. Feeling the call to serve others, she worked for many years in the ambulance service industry in North Alabama and served many people in all kinds of emergency situations; but, that was not all God had planned for her (Jeremiah 29:11).

In the early summer of 1996, Cathy attended her first service at the Metropolitan Community Church of Huntsville (now Spirit of the Cross). After many years of searching, she knew she had found her church home. After joining the church, she began to serve in many ways, including service on the board of directors. She also served on the board of trustees for a short time. In February, 1998 , she accepted the call to the ministry and returned to college to earn a Bachelors and Masters Degree in Social Work. In September, 1998, the pastor resigned from MCCH, and, as vice moderator of the board, Cathy became the lay pastoral leader of the church while assisting in the search for a new pastor.

Cathy, known affectionately as “C” George, was appointed as the associate pastor and minister of congregational care on January 1, 2009. She continued her pastoral training and was ordained by Spirit of the Cross on July 19, 2009. Continuing to follow her call, she serves others both in her secular career at the Mental Health Center and at Spirit of the Cross (Isaiah 6:8).

Cathy is the youngest of six siblings, has 10 nieces and nephews, and many great nieces and nephews, most of which have been very supportive in her ministry. Her parents and oldest brother have passed away, but, she visits regularly with the rest of the family. Cathy also has many close friends and supporters in her life and is looking forward to continuing her ministry in the years to come.

This email address is being protected from spambots. You need JavaScript enabled to view it. 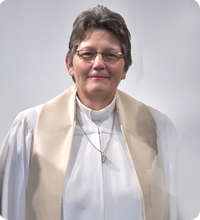